May 18, 2013 - Comments Off on Profile: John Warren, Furniture Designer 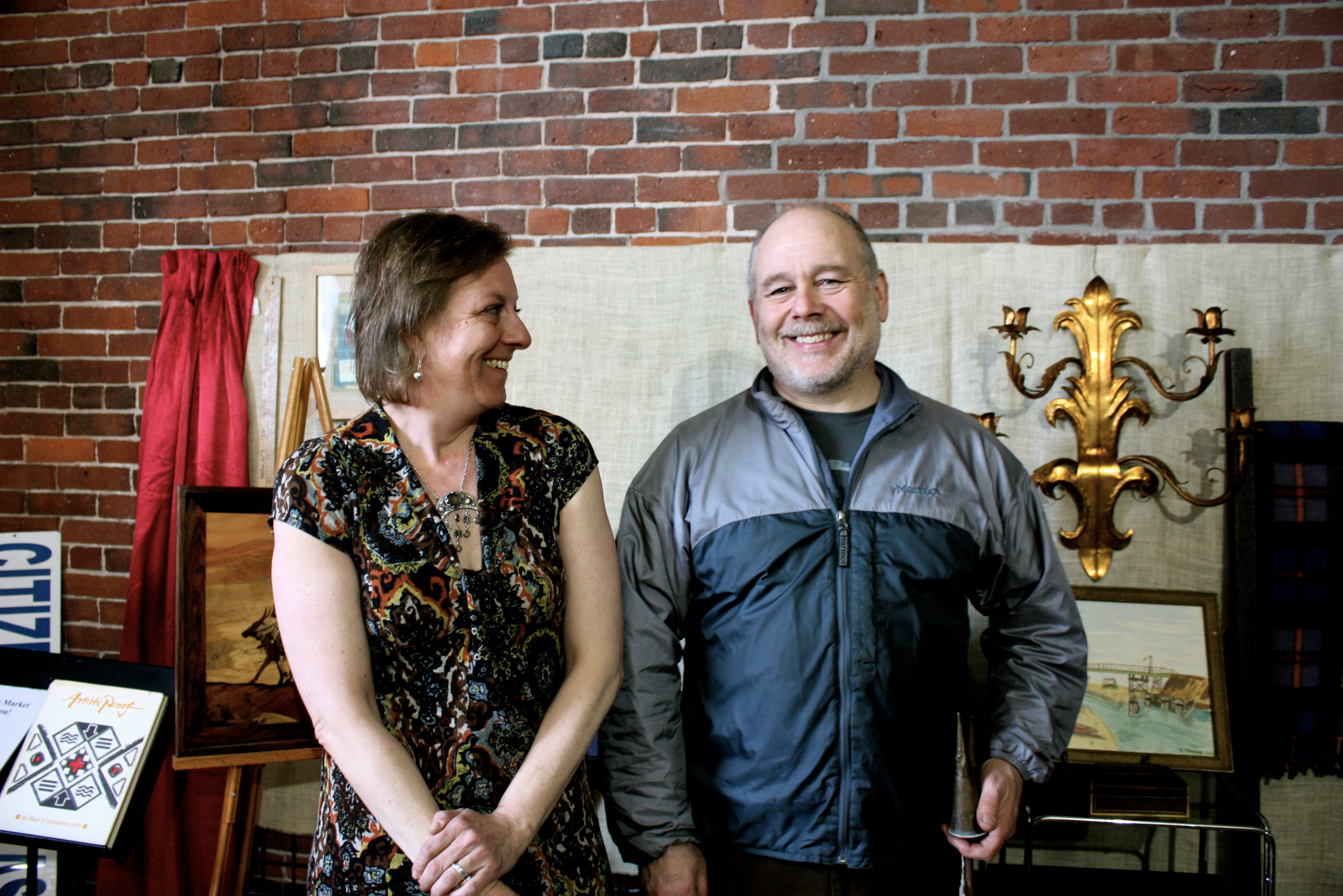 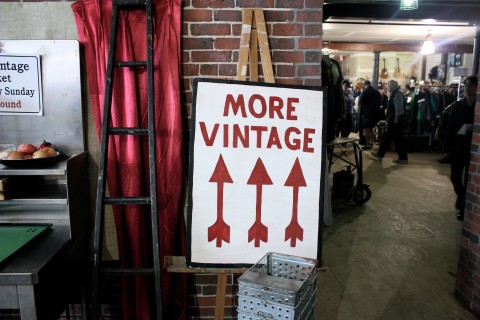 A few years ago while strolling through the Brooklyn Flea during its first season, I met a furniture designer from Boston named John Warren, and his partner Stephanie. I was immediately attracted to his design aesthetic and creative use of repurposed materials. My studio was in dire need of a cabinet for organizing fabric swatches and sewing supplies, so I decided to commission John to create a custom piece. 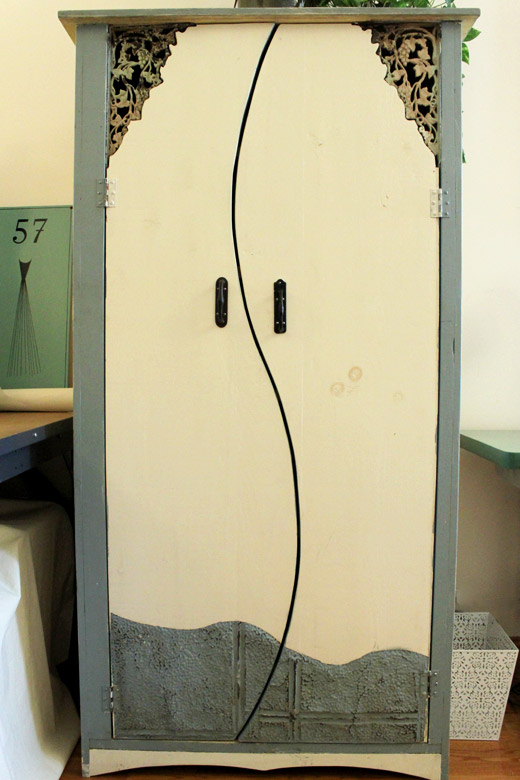 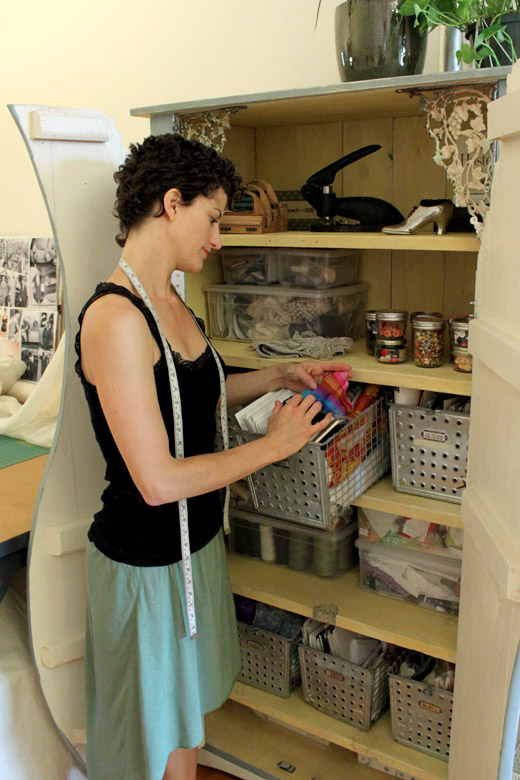 For the cabinet, I specified the dimensions, as well as a general color palette, and some types of materials and details I liked from John's previous creations. I knew that I wanted ceiling tin to be included in the mix, as well as the ability to hold a couple rows of locker baskets–also sourced from Stephanie and John–inside, as they are perfect for cataloguing fabric color cards.

I then gave John creative freedom to design and construct the cabinet. To my immense satisfaction, he came up with the most beautiful asymmetrically curved shape for the doors, and incorporated vine-patterned metalwork from discarded schooldesks. As a couture clothing designer I tend to have incredibly high standards. I was floored by his craftsmanship, especially the precision with which he cut the wood to match the jagged edges of the metalwork pieces. 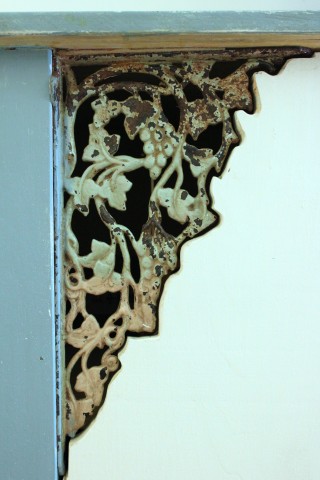 It was such a pleasure to work with John on my one-of-a-kind cabinet that I wanted to share with you more about the details that went into the piece, how he got his start in craftsmanship, and about the vintage market called SoWa that he and Stephanie now run. To do so, I went up to Boston to see John and Stephanie in their element at SoWa. Here's a bit about how they are keeping Boston hip and bringing vintage back. 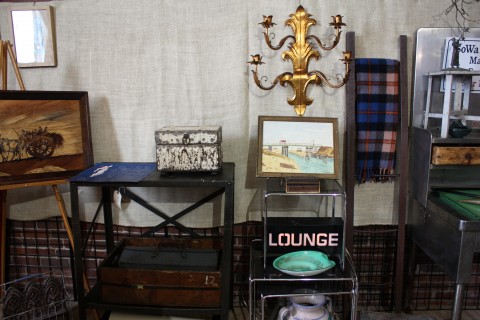 Nicole Lenzen {NL} : John, can you tell us a bit about what you were doing before you started this flea market?

I was the guy who controlled which vendors were allowed in and who got kicked out so I was kind of the boss of the place. I was pretty sweet on her and gave her a good space. And here we are. 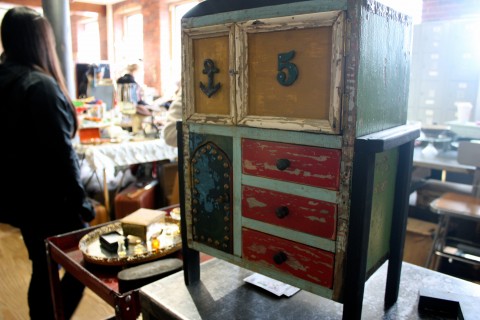 {NL} : Now you also design and build custom furniture. Did you receive any training for that?

{JW} : I’m completely self-taught. When I worked the flea market I started stripping and repairing furniture. Then I started building really crappy bird houses that sold for $5 apiece. The next year the crappy bird houses got less crappy and sold for $20 each. As I got more into it I saw a correlation—the better the construction, the more money people would pay. So I just kept going and going and now my pieces sell for $2000 and up.

{NL} : Is there anyone you wish you could go back in time and learn from? Someone whose style you admire?

{JW} : I don’t have any famous furniture guys but I guess I’m more inspired by those who weren’t really trained, who were self-taught and able to repair stuff. Like the guys who built the railroads; they were just handymen who could make something out of nothing. That’s really what inspires me the most–that ingenuity and American spirit. I love it. 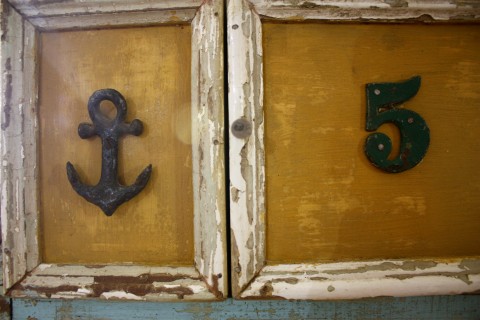 {NL} : What else inspires your designs?

{JW} : Reusing old materials inspires me the most. We have such a wasteful society and throw so much stuff away. In other parts of the world, like South East Asia and Vietnam,  some of the carpenters have a chisel, a saw, and a hammer and they make these insane pieces of furniture from almost nothing. So I'm trying to reuse as much as I can and keep those items alive. 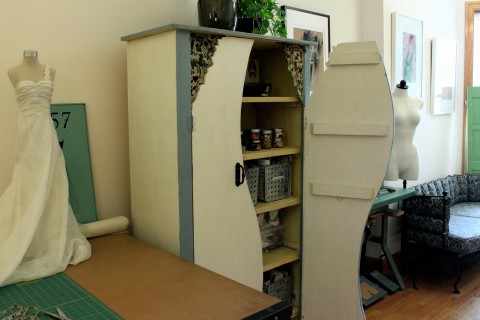 {NL} : Could you tell us how you sourced the materials for the custom cabinet you made for me?

{JW} : There was a barn up in Deerfield, NH that was being torn down, so I knocked on the door one day and asked, ‘What’s going on with the barn? Mind if I take some wood?’ The guy said, ‘No, take whatever you want.’ This was like a 100 x 60 foot barn. The roof had caved in but there were these beautiful 12-14 inch barn boards. I must have taken three to four hundred boards out of that place, and he gave them to me for free. I used that wood for almost two years in my projects.

The ceiling tin came from a Victorian house in the north end of Manchester, NH. I was out trash picking one night and I saw this ceiling tin piled up over the top of a dumpster. I looked in there, and I got permission to take all of it. I took over 600 pounds of ceiling tin in my Toyota station wagon! I had it attached to the roof—it was quite a scene. 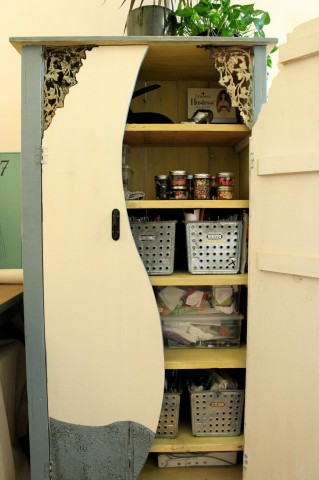 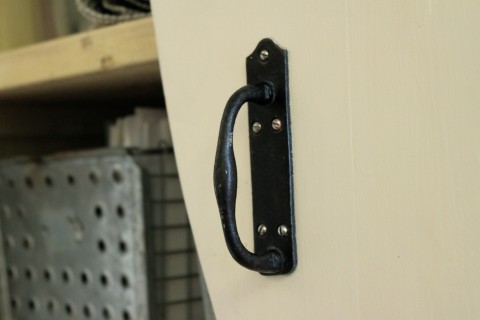 {NL} : Stephanie, how did you get into vintage furnishings and antiques? What were you doing before this?

Stephanie Pernice {SP} : I was in high tech sales for 13 years. I had purchased a farmhouse on the north shore of Massachusetts 20 years ago and I started antiquing to decorate it. I was going around finding different things to put into it and I just found I liked that method of decorating and growing my style organically.

Sometimes I would find something in a flea market or yard sale or wherever and I wouldn’t like it as is, but I could change it. Or I would find dealers who would buy the stuff I wanted to get rid of. 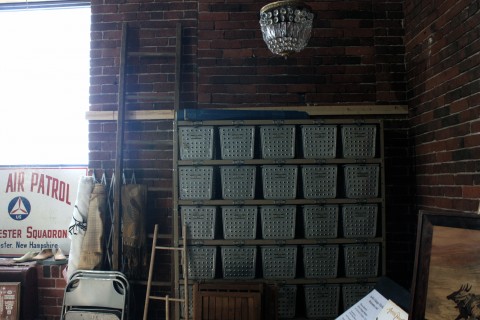 So I started selling to dealers–that’s how it began. Then designers started coming to my home and buying pieces that were for sale. Then I started an event out of my barn that I would do once a month or once a quarter and I grew a list. It became very clear I needed to take it off-site and I started doing the Brooklyn Flea.

We began wanting to do something local because we have kids at home and the travel was very time-consuming. When the economy was a certain way, we went where there was a volume of people to sell to. Then as things looked like they would work here, we opened up this venue in Boston. So we spent about three years going to New York and now we’re going into our fourth season here. 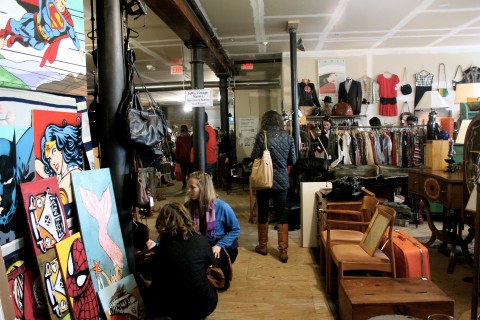 {NL} : How did your flea market, SoWa, come to grow to its current size?

{SP} : We were invited to curate this indoor vintage market to occur at the same time as a summer outdoor market for art. The first year we ran it as an event only kind-of-thing, once a month, kind of like my barn sales. Then we decided to go weekly, and then thought the wintertime could also work. And it did.

I think we’ve become a Sunday pleasure zone for people, a Sunday happening place to go to in Boston. We do a lot of tourism marketing so people are starting to come from all over the world. It’s very cool. 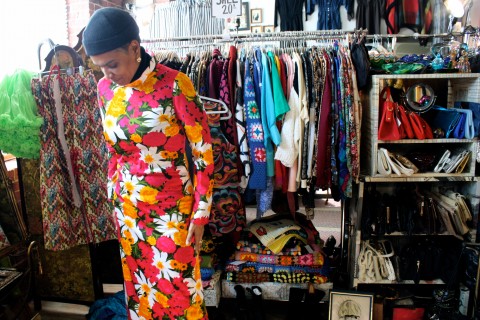 {NL} : How did you and John originally meet? Did you reach for the same vintage piece?

He asked me out after a few months and a few months later I said yes. It was really fun. He took me trash picking. I was in his area and we were going to grab a bite to eat and he said he usually spins around to see if there’s anything good in the trash and I was like, ‘Alright.’ Then we went out and got something to eat.

The next night we went back and did it again. Then we had a real date the following weekend. But it was definitely a flea market romance. 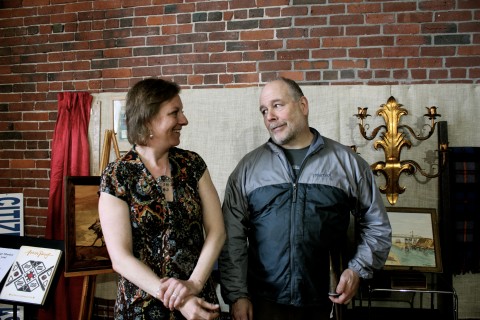 {NL} : And what is it like starting a business together?

{SP} : It’s crazy. It's nuts because you’re taking an artistic endeavor and smushing it into a business format. And we’re both very artistic. I guess I have the sales thing from having done it in high tech for so long. But it’s been a challenge, and it’s been great that we’ve been able to do this market. 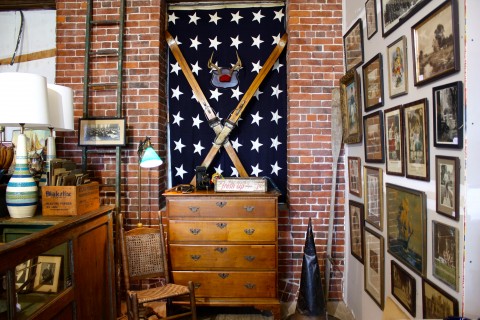 {NL} : What would you recommend to someone who may want to start something similar in their community or neighborhood?

{JW} : The first thing is, don’t expect to make a million dollars right away. The biggest reason people don’t do things is because they are afraid to begin. But once you do, things  start going in a positive direction. So just start, even if you start small.

{SP} : I think if somebody could team up with a group of artists, vintage, art, and food is a great combination. What I saw in Brooklyn was that it was vintage and art, and then they added food. If you can add a food element, or at least some kind of strategic partnership with food, it would just be awesome. Because when you start to do something like that for the community, it’s always a good thing. 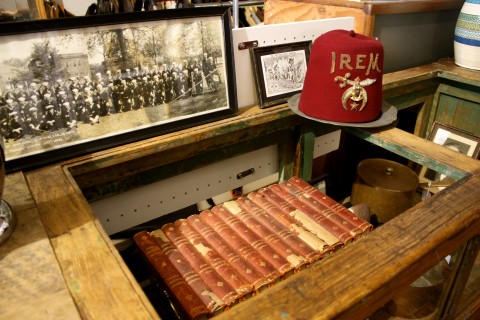 I think it’s important to continue what we’re doing because it gives people an economic alternative for furnishing their homes. Shopping vintage is the smartest thing you can ever do. It really is. There’s no way I could have afforded all the beautiful things I have if I had bought everything retail. There’s just no way. 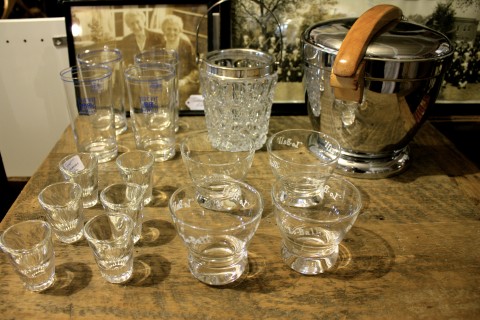 {NL} : What would you suggest to people who are searching for quality vintage pieces at flea markets like yours?

{SP} : I always tell people to buy what speaks to them. People need to find their own voice. When you bring somebody to help you, sometimes I’ve seen that person confuse the situation because it’s his or her taste.

People need to trust their voices, and consider whether it’s your voice they have in mind or their taste. The biggest thing is that if you see something, and you love it and it speaks to you, trust your instinct and trust your own design aesthetic. You have to develop that over time. 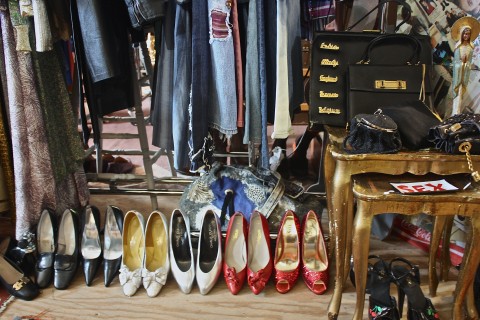 Trust your voice. Buy things you truly love. Try to buy things that are useful. If something is unrealistic or doesn’t match your budget, it’s ok to walk away too because there is always more stuff. We’re always going to find new things and that’s part of the fun.

Thanks to John and Stephanie for this interview. If you are seeking tastefully curated antiques or beautiful and unique custom furniture for your home or retail space (or an heirloom wedding present, I might add), I highly recommend seeing what John and Stephanie have to offer. Their vintage wares can be found online at Vintage and Modern, vandm.com, and John's original pieces on his website. If you're ever in the Boston area, be sure to stop by the SoWa Vintage Market to say hello!

Published by: Nicole Lenzen in Gifts, People Who Inspire, Vintage