Event: Join Us for ‘Stories & Style’ at Bene Rialto on January 29th 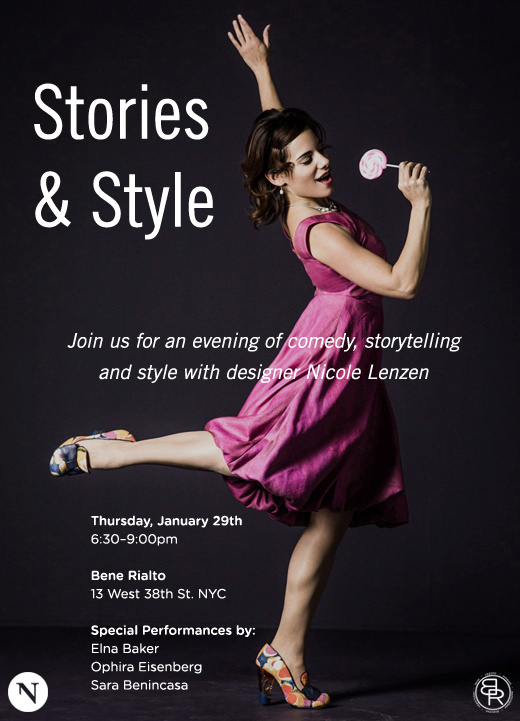 Mark your calendars—you won't want to miss Stories & Style. Every piece of clothing and style comes with a story, whether it's something that happened while you were wearing it or the very inspiration behind the design. At Bene Rialto on Thursday, January 29th, we're joining forces with three storytellers to bring you a night of entertainment and fashion.

Come hear NPR's Ophira Eisenberg, Writer/Comedian Elna Baker, and Author/Comedian Sara Benincasa recount fashion-focused tales—we guarantee you won't leave without having a laugh. You'll also be able to meet the designer and try on pieces from the Nicole Lenzen ready-to-wear collection, browse the other apparel and accessory brands featured throughout Bene Rialto's multilevel retail marketplace, and snack on some yummy appetizers and wine.

An RSVP will be required to enter, so get your name on the list for this free event quickly!

Ophira Eisenberg is standup comic, writer, and host of NPR's weekly trivia, puzzle, and game show "Ask Me Another." She has appeared on "The Late Late Show with Craig Ferguson," "Comedy Central," "VH-1," and is a regular host and storyteller with The Moth. "Screw Everyone: Sleeping My Way to Monogamy" (Seal Press/April 2013) is her first book.

Elna Baker is a writer and comedian whose book The New York Regional Mormon Singles Halloween Dance was published by Penguin. As a comedian and storyteller, Elna has performed with The Moth, on This American Life, Studio 360, Radiolab, BBC Radio 4, at the Upright Citizens Brigade, The PIT, The Magnet and at many other venues throughout New York City.

Sara Benincasa is an award-winning comedian and author of the books "Great" and "Agorafabulous!: Dispatches From My Bedroom" from William Morrow (a division of HarperCollins). Her comedy has won praise from the Chicago Tribune, CNN, The Guardian, and The New York Times.

Nicole Lenzen is a Brooklyn-based designer whose womenswear collection is inspired by the freedom of movement in swing dancing. As a trained patternmaker with over a decade’s worth of experience in the fashion industry including custom couture, her pieces allows women to—as they do in the energetic Lindy Hop dance—swing out and let go.